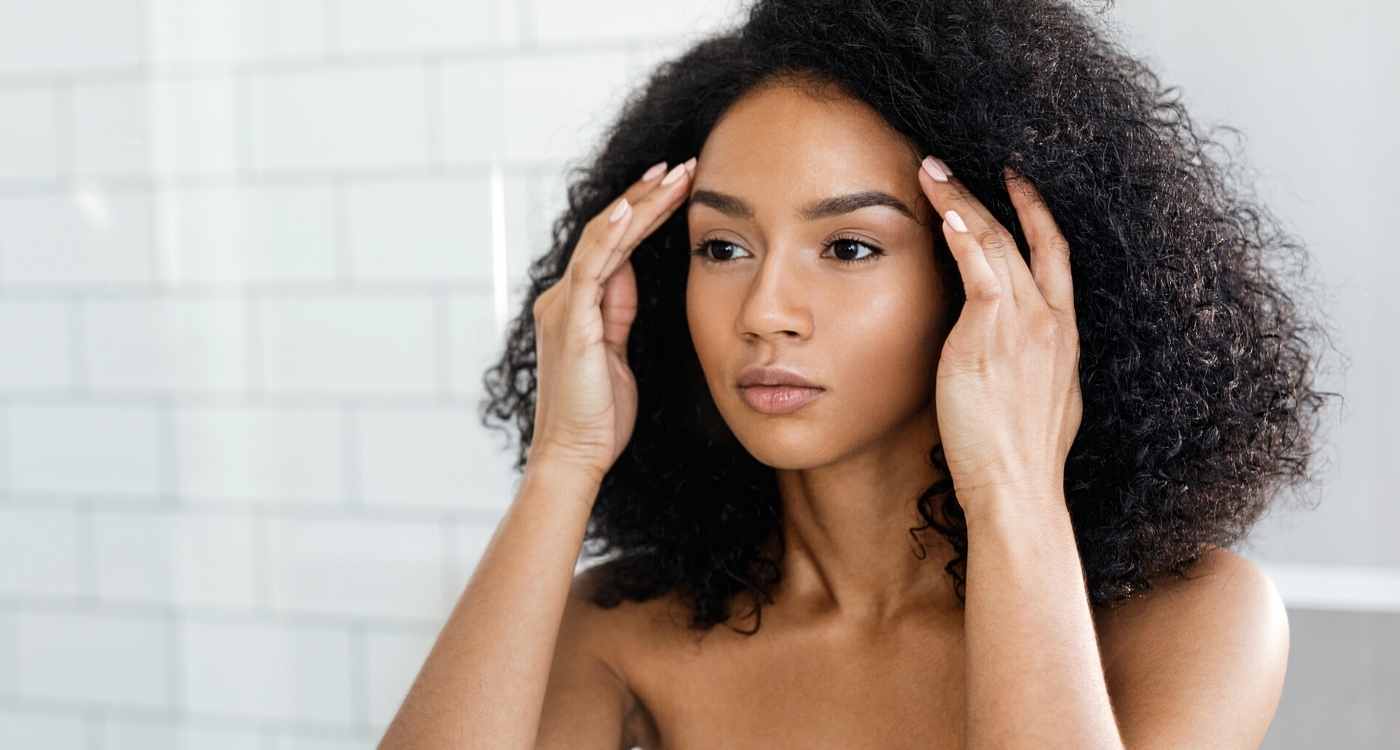 Since 2009, Gina Holzer would look in the mirror, wishing she could change her imperfect skin, have thicker eyebrows, and longer eyelashes. Large pores, uneven skin texture, acne scars, thin eyebrows, and short eyelashes had left her feeling not her best, so she wore makeup to cover up these imperfections whenever possible.

She tried product after product over a span of 10 years, hoping one would improve these things and make her feel confident in her own skin. From biotin vitamins, to Latisse eyelash treatment, serums, and even changing her diet – nothing she tried worked.

So, after doing research, Gina took a different approach starting from the inside out: ingestible beauty, which is essentially effective dietary supplements. She began doing research and blended her own supplement mixes at home, tested them on herself, and didn’t stop reformulating blends until she found one that worked.

It was when she discovered the power of collagen, blending it with biotin and silica to spike her coffee, teas, and smoothies every morning.

Within 2 months of taking collagen supplements, her skin texture evened out, complexion brightened, pores became smaller in appearance. Her eyebrows grew thicker and eyelashes longer. Her nails stopped breaking and were thicker. Her digestion felt better and stopped getting stomach aches. And her hair stopped falling out in the shower and became stronger and shinier.

That’s when Gina realized the entire time she tried to improve her beauty – hair, skin, and nails – she wasn’t targeting the root of the problem, which is from the inside out. From this discovery, she started a collagen supplement company, Wholy Dose, to provide access for others who are looking for an effective beauty and health solution.

Gina’s discovery was hardly a new one, but during that time it was unheard of.

The History of Taking Collagen Supplements

For centuries, women of different Asain cultures have viewed collagen as “a fountain of youth”, routinely consuming foods rich in collagen like pig’s feet and shark fins in hopes of preserving joints and smoothing aging skin. However, in the United States collagen didn’t reach popularity until the 1980s – firstly used as an expensive injectable filler to soften fine lines and plump lips.

It wasn’t until recent years that edible collagen (also known as “collagen supplements”, “collagen vitamins”, “collagen peptides'') has begun to catch on. A growing number of studies and evidence strongly suggest that taking collagen can ease joint pain and arthritis symptoms, promote wound healing, improve skin, and aid in muscle pains. With this new evidence, former skeptics in the medical field also support its claims.

According to the Nutrition Business Journal, in 2020 consumers in the United States alone were projected to spend $293 million on collagen supplements, up from reports in 2014 at only $50 million. Globally, as collagen makes its way into more supplements, foods, beverages, topicals, and even medical practices, sales in the market are projected to reach $6.5 billion by 2025.

However despite collagen’s growing popularity, some still are unaware of how well collagen works and how safe it is.

Collagen: The Glue That Holds Your Body Together

Often called the body’s scaffolding, collagen is “the glue that holds the body together”, says New York dermatologist Whitney Bowe, author of The Beauty of Dirty Skin: The Surprising Science of Looking and Feeling Radiant from the Inside Out.

Dr. Whitney Bowe further explains that collagen makes up about 75% of the dry weight of your skin, providing the volume that keeps skin looking plump and keeps fine lines at bay. Apart from skin, collagen is also rich in the amino acids proline and glycine, which you need to maintain and repair your tissue, tendons, bones, and joints.

“As we get older, we break it down faster than we can replace it”, she says, also noting that we begin to lose about 1% of our collagen per year in our mid-20s and as much as 30% during the first 5 years of menopause.

While injecting collagen has been a tempting solution, it doesn’t last as long as other fillers and tends to prompt allergic reactions. For this reason, it has been used less and fallen out of favor in many medical skin care practices. When collagen is applied on the skin, it doesn’t absorb well, Dr. Bowe says.

When she learned a few years ago that people were eating collagen instead of injecting and applying it, she was skeptical at first But since then, she has since changed her mind.

“Just in the last few years, there have been some impressive studies showing that ingestible collagen can indeed impact the appearance of skin,” says Dr. Bowe.

It’s true, the science of collagen is truly in its beginning stages – with more, impressive clinical studies emerging.

More recently, a 2019 review of eight studies including 805 patients, found that “preliminary results are promising for the short and long-term use of oral collagen supplements, for wound healing and skin aging.”

Another study found that women who took 1 gram of collagen daily for 12 weeks reported 76% less dryness and 12% fewer visible wrinkles in their skin, with a better blood flow to their overall complexion, and a 6% higher collagen content in their body.

“It’s [collagen is] definitely among the top three products people ask me about, and I believe it does hold promise in some diverse areas of medicine,” says Dr. Mark Moyad, the director of the complementary and alternative medicine program at the University of Michigan Medical Center.

“The science [of collagen] is truly in its infancy,” he says. But with that said, he believes collagen holds promise.

Collagen is an excellent source of protein, packing in more protein per calorie than any other sources, while also containing less sodium and sugar. Thus, Dr. Moyad finds the evidence suggesting it may improve joint health, body composition, and healing rates very intriguing.

In a recent study with 53 elderly men who suffered from loss of muscle caused by aging (also known as, sarcopenia), found that those who took 15 grams of collagen daily, in addition to lifting weights 3 times per week for 3 months, gained significantly more muscle and lost more fat than those who only lifted weights.

Collagen has also been shown to be a powerful wound healer – including the recruitment of immune and skin cells, ability to stop bleeding, and stimulation of new blood vessel formation. In a study, 89 long-term care residents who had pressure ulcers were given a collagen supplement or a placebo supplement 3 times daily for 8 weeks. Those who took the collagen supplement saw their wounds heal twice as fast compared to those who did not.

A few other studies have also concluded that collagen supplements can help with sports-related joint and arthritis pain. If this benefit from collagen supplements continues to develop in a large, long-term clinical trial, it could be a game-changer, says Dr. Moyad. “We are desperate for more low-cost, nonaddictive, and safe pain-modifying products,” he says. 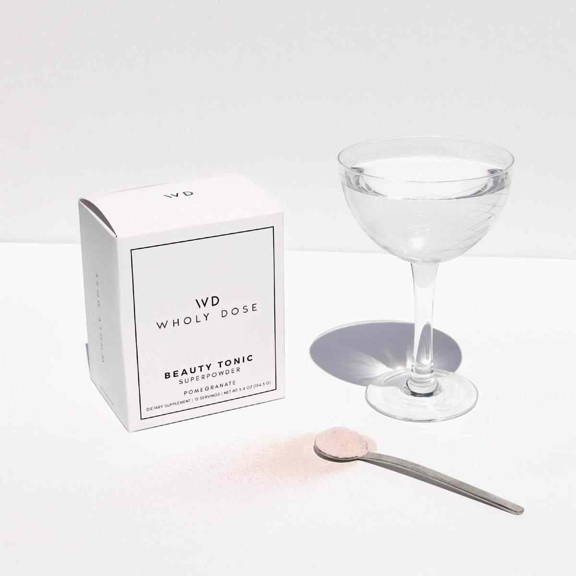 YOUR ONE STOP SHOP FOR ANTI-AGING

Collagen Peptides To Smooth Your Wrinkles and Fine Lines

SHOP BEAUTY TONIC
BEFORE & AFTER PHOTOS

All that to say, some individuals remain skeptical of the effectiveness of collagen.

Dermatologist Lauren Eckert Ploch claims that stomach acids have the potential to break down collagen proteins you consume before they are able to reach the skin intact.

Then there is oftentimes the ick factor. Collagen is inherently an animal product made of fish, chicken, and cow parts. Also, if you’re unable to find a purely sourced and high quality collagen supplement, you may find the taste of lower qualities unpleasant.

With this in mind, consuming collagen has been around for centuries and there is a large body of evidence supporting its safe usage. The Senior Vice President of the Council for Responsible Nutrition, Andrea Wong, backs this and states that as ingredients go, collagen has an excellent track record.

She explains, “It has been around for ages, and there is a large body of evidence supporting its safe use”, and that studies of the effectiveness of collagen also look at side effects of collagen – determining that, in general, collagen is shown to be safe to consume.

Further, Wong details that supplement companies are required and must comply with federal “good manufacturing practices,” which prohibit unsafe levels of any contaminants like heavy metals in products.

How to Choose Your Collagen

You can get collagen from bone broth, which is made of chicken, fish, or beef.

Look for a trusted collagen brand that gets ingredients from [non-GMO or organic] sources, and holds high-quality sourcing and manufacturing standards. You can also check the company’s website to see the source of their collagen and how the company produces safe and effective products.

With further advice, Dr. Moyad states “consumers need to have the attitude of ‘just prove to me that it’s clean and I’ll try it”, noting that it can take up to 12 weeks for results to show. “It might help, and it probably won’t harm, unless you are not being diligent about quality control”, he adds. tips, recipes, and special offers delivered to your inbox

We now offer fast, free international shipping via our partner Mayple. Click below to shop our products worldwide.